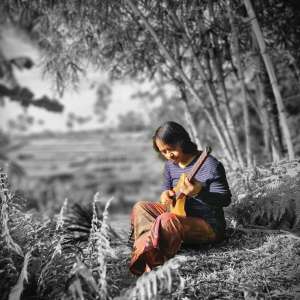 Would earn fame throughout the region with Gigi, founding the iconic band in 1994. More than twenty years later, they are still going strong Having released 26 albums to date, and solidifying their status as one of the biggest, most successful pop rock bands in Indonesia. Dewa’s ambitions on his instrument extend beyond his commercial success, as he has released eleven solo albums, exploring his more adventurous jazz / fusion / progressive side. He saw his audience grow from regional to worldwide, when he joined onto the MoonJune Records label in 2011, releasing seventh albums to date:

Throughout the pandemic, Dewa Budjana has continued to work on his album with the use of remote recording and in 2021 releasing NAURORA, which featured Joey Alexander, Simmon Philips, Dave Weckl, Carlitos Del Puerto, Mateus Asato, Paul McCandless, Jimmy Johnson, Ben Williams.

Alongside this, single and album collaborations with various artists including: Jimsaku (Legendary Japanese Duo), Tribute To Peter Gabriel, and several genres of music in Indonesia, including Ndarboy Genk, Raissa Anggiani and many more names that will be released in the near future.

Harmony represents an important principle in Dewa Budjana’s music career. This is apparent from his practice of balancing his pop rock career in Gigi with his interests in esoteric jazz, and even aligning his beliefs as a Hindu by creating a religious album:

Dewa made 2015 a year to remember: realizing a dream, with the “Duaji & Guruji” performance in Bali, together with his life-long guitar idol, the great John McLaughlin

The show concluded in soaring fashion, with Dewa joining John and his band on stage for a rousing climax to an incredible show!